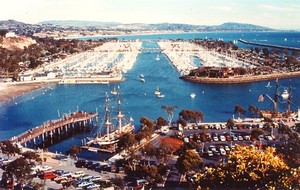 The Dana Point housing market, found in Orange County, California, saw a decrease in the number of foreclosures but an increase in the number of defaults during July 2010, continuing a pattern that has made the region one of the riskiest real estate markets in the country. According to an August 17, 2010 report from the Orange County Register, "Lenders seized fewer homes in July for a third straight month, repossessing nearly 10% fewer homes than in June. Meanwhile, default notices filed against homeowners who have missed three or more house payments increased 9% last month from June’s levels. Both numbers, however, were down significantly from a year ago, apparently as lenders either seek alternative means to deal with unpaid mortgages or postpone their losses. According to MDA DataQuick: Lenders seized 629 Orange County homes in July. While that would have seemed like an unusually high number during the slump of the mid-1990s (which peaked at just under 700 foreclosures in one month), it actually was down 22% from the total number of families losing their homes in July 2009. Since the housing slump began in the fall of 2005, O.C. foreclosures have gotten almost as high as 1,450 in one month...Meanwhile, default notices – which peaked at 3,500 in the winter of 2009 – totaled 1,462 in July. That’s down 51% from a year ago."

Dana Point homes for sale remain some of the most dangerous investments in the nation's housing market, according to a second report from the Orange County Register. This piece, composed by Jeff Collins on August 24, 2010, states that "or the second quarter in a row, Orange County’s risk of a price decline within a two-year period ranked ninth in the nation — just behind eight other metro areas that were tied for first, according to economists at mortgage insurer PMI Group. The latest housing risk assessment from PMI, based largely on first quarter stats, shows …Orange County home prices have 99.7% chance of price loss in two years, or by the winter of 2012. PMI Group doesn’t say how big of a price drop that would be, so the declines could be small or large. That’s a slight improvement over the previous two quarters. In the final quarter of 2009, the probability was 99.8%."